As this old blog still gets lots of hits I thought I would place a link to my new project here for anybody who might care to follow it's development. It's French and Austrians in 28mm and this time it has a slight twist to the theme as it is also a means of therapy for me as I begin my recovery from a serious bout of mental illness that has overshadowed my life (and my hobby) in recent times. But its still mostly about painting soldiers so I hope that those who enjoyed this blog will find it interesting.
Cheers,
Lee.
Napoleonic therapy project 2012. 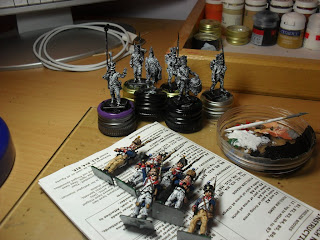 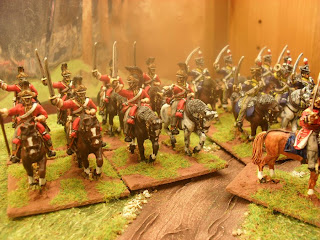 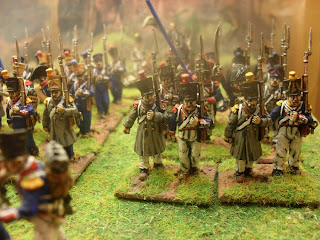 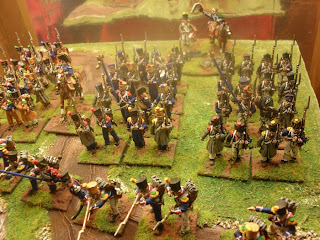 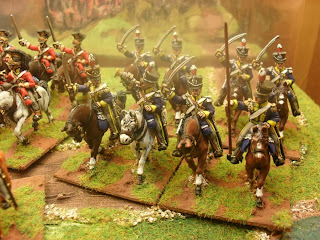 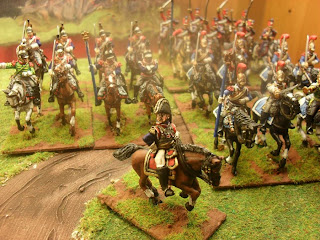 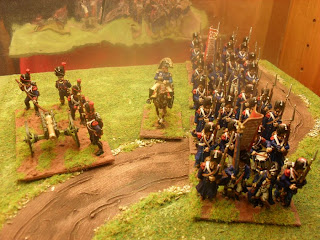 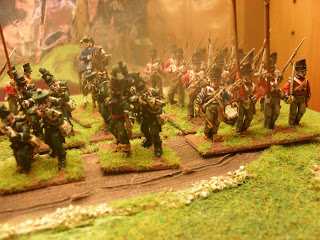 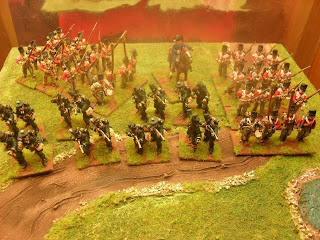 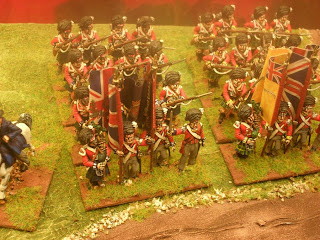 Well, I think I finally managed to get closer to the correct colour for French artillery pieces. A few days ago I posted a question on the TMP forum asking about the Gribeauval artillery system. I wanted to know if the carriages were all standard sizes with interchangeable barrels. In the course of many detailed and useful replies (plus a few sarcastic ones, why do they do that?) I discovered that my shade of green was completely wrong! Actually I learned a fair bit about French artillery of the period generally. Here are the repainted guns plus crews complete with new basing style.
I have just completed re-basing all 350 figures in this new style and I really like it. I think it represents the Waterloo muddy ground far better than the old basing style. Hopefully tomorrow I'll post some pics of the infantry and cavalry. I have closed up the infantry (now 15mm frontage) and based them in fours WRG style. I think they look much better this way.
I also made 2 little command bases using leftover infantry figures, again I think the new bases work well.
3 batteries of artillery, 1 guard foot with 6 pounder (non Gribeauval carriage I'm told!) plus 2 foot line manning 8 pounders. 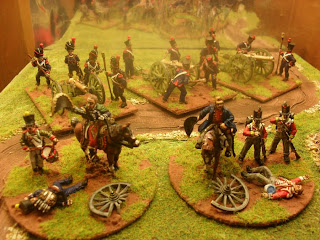 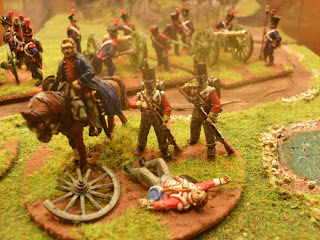 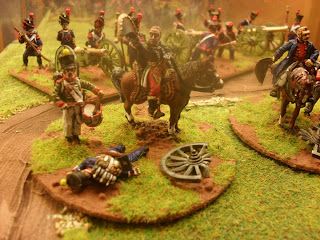 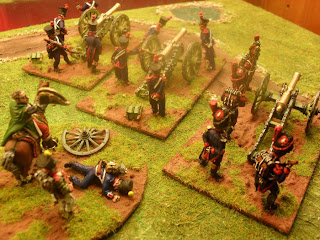 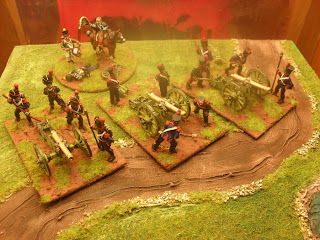 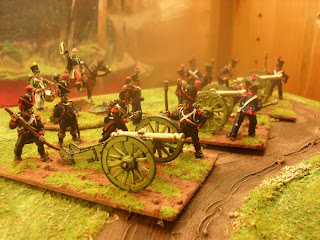 I'm painting a couple more French artillery bases, and using Front Rank guns for the first time. The carriage is entirely different from the Perry version, really chunky and shorter. My question is was the carriage standardised or were they built in different sizes depending on weight of the barrel? There is just such a big difference between the manufacturers, but I'll use them whatever is correct as I like the big FR models. I'm planning to replace all my other 5 guns with FR guns anyway so its an academic question.
I have painted the other 8 FR 95th Rifles so that unit are now all FR metal.
Picture of the 2 carriages for comparison, and a shot of what I'm working on, including a lovely General of heavy cavalry in bicorne who will take command of my cavalry brigade. 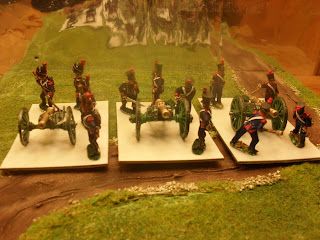 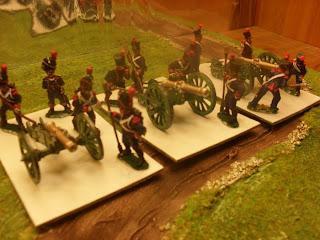 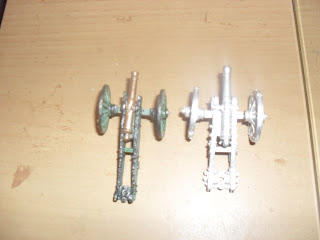 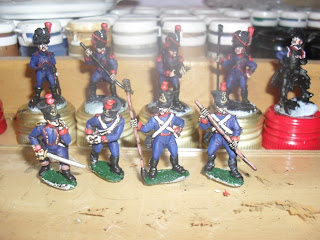 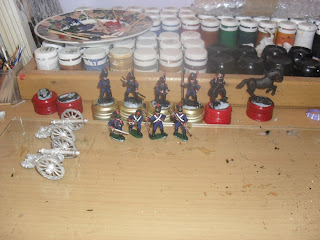 I have to admit to feeling rather sheepish about writing this post. It's been a funny few weeks and in that time I have 'sold' my collection of figures and then managed to hold on to them, thanks to John, who has showed great understanding of my unpredictable behaviour, of which I am more than a bit embarrassed!
So, I have tried to understand what is the main issue that has caused my enthusiasm for the period to wane to suddenly and what I can do to get going again. As I said to John I think there are two main problems:
1. I have struggled with finding a set of rules that really works for me.
2. My knowledge of the period is basic beyond the uniforms and equipment etc.
I am going to carry on with this project for the coming year. I have selected some books on the Waterloo campaign and Napoleonic warfare in general. I'm starting with 'The Art of Warfare in The Age of Napoleon' by Gunther Rothenberg, an excellent read so far. I know that I want to hold on to the 'nostalgia' element of this project and to be able top play the type of games that I used to enjoy so much and to that extent I want simple fast play rules.
Having painstakingly removed 330 odd figures from their bases for packing (and broken Foys Fourth Law in the process: 'Basing' ), I now face the task of re-basing them and will take the opportunity to close them up somewhat and change/improve the basing style. I have also ordered more French artillery from Front Rank and have decided that I will stick with FR for the future.
A last 'thank you' to John, and hopefully normal service will soon be resumed.
Posted by Lee at 03:29 9 comments:

12th Jan 2011. edit.
I have edited this post and removed a couple of subsequent posts in order to bring my blog situation up to date.
Having come very close to giving up and selling the collection John has kindly agreed that I keep the figures and the sale has been cancelled. I am not entirely sure what direction things will take but if I do move on with the blog it will be focused very much more on the gaming aspect as the New Year progresses. In the meantime I am searching for inspiration by reading a few good books on the period. As the figure were all de based for packing I will begin again by rebasing on narrower frontages as this had bugged me for some time. This will mean a lot of time spent re texturing bases etc in a slightly different style. I have some Front Rank French artillery to paint to get me back in the swing again. A big thank you to John for being understanding, as I said to him, I feel a bit of an idiot! 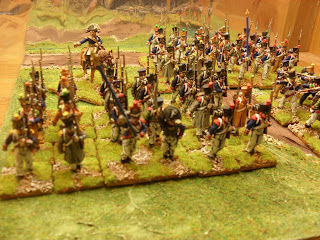 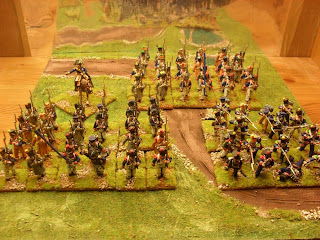 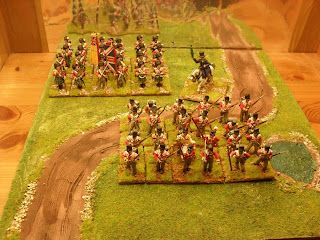 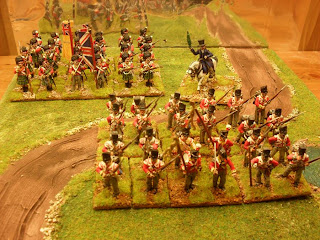 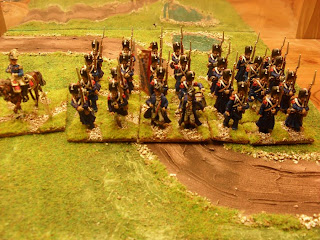 Some thoughts and New Year plans.

Rules and periods.
Well I played through 7 bounds of 'Paul's Rules' (thanks for all your help Paul). I then decided to reset up the game and play through a few turns of 'Napoleonic Fury' for comparison. I'll try to quickly explain why I did this.
I have never really been 'into' Napoleonics as a gaming period if I'm totally honest, although I'm beginning to learn more as I go. My first love was always the American Civil War and probably at heart it still is. I played so many ACW games with so many rule sets before I discovered 'Johnny Reb' and absolutely loved them. Previously we had used a variation of the old Airfix rules, Newbury (which I could never quite get my head round) and then Circa 1863 rules. But JR was a revelation, at last I thought a set of rules that truly captures the essence of ACW combat. I played many games with them. Then along came Fire and Fury of course and everybody started to shout about how simple and playable they were so I bought a copy, not long after the came out. Games became very simple to set up and play, fast and furious games with a result in 2 to 3 hours, perfect for those mid week/ after work evening games. But I continued to play and love JRII and I will argue that they remain the finest set of ACW rules ever written. I still have my old boxed set of JRII and still enjoy reading through it occasionally, not many rule sets you can say that about?
The Napoleonic variation of F&F is very similar and plays fast with rapid results. I only got through 3 turns but it all came flooding straight back to me and the units seemed to fly around the table! I took a few pics as you can see. I had to reorganise into bigger units and again this did look much more impressive on the table, the Highlanders for example being of 7 stand of 4 for a total of 28 figures. So, I'm going to take a couple of weeks off to think about where I go from here in the New Year. I would need to reorganise my units for Napoleonic Fury and this would mean a bit more painting etc but NO rebasing at least.
Here's a link to 'Napoleonic Fury' . I have now tidied them up a fair bit and have them in Word format, and have removed all Nations except British/French/Prussian. If anybody should like a copy of the tidies up version sent to them please email lgramson@aol.com
Finally.
Some might wonder WHY I stopped wargaming the ACW? Well, I spent a few years re enacting the period as a member of the 42nd Pennsylvania Infantry Volunteers, the 'Bucktails'. During this time I became a serious student of the period and some of the early battle field photographs taken by the likes of Gardner left me feeling extremely uneasy. The shots of rows of bloated corpses lying where they fell disturbed me deeply and I became uncomfortable with both playing toy soldiers and re enactment of the period. I think I'm largely over this now but I wonder how many of you can understand this? One day I will once again paint the Blue and the Gray though, I just know it !
42nd Pennsylvania 'Bucktails' web page, I must be in some of those older pics!
20,000 page views.
I reset the counter in March and since then have recieved 20,000 page views. I'd like to say a big thank to those who follow my ramblings here and hopefully more battles will follow after Christmas.
Some pics of the Napoleonic Fury test game. 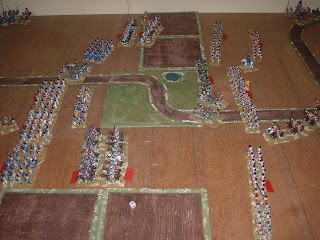 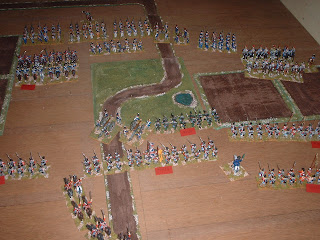 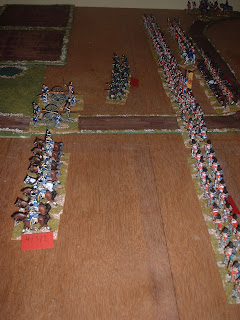