Here is the completed 92nd Highland battalion. Quite enjoyed painting those but the kilts were challenging! Next is a French Line foot battery of 4 guns and 16 crew. All 'Essex' miniatures as usual. Using a white undercoat on the guns only as I feel it gives slightly brighter look when finished. 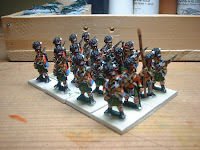 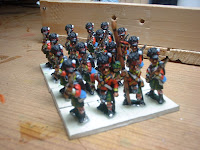 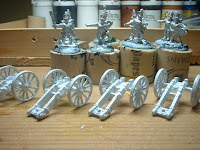 Quick update: The Highlanders are going well. Decided to go for the 92nd with thier yellow facings etc but strictly speaking this regt should not have the peak on the bearskins, not a major problem though in 15mm! Been great furn painting the first 8 figures, after a bit of headscratching I went for dark green kilts with yellow details to represent the 'Governmet sett' tartan. Not too bad though?

I'll add a photo of the finished/based battalion later this week hopefully.


Next up, a battery of French line artillery. 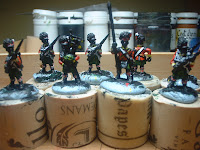 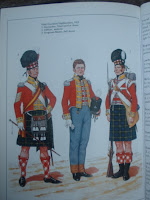 Above: First 8 figures of the battalion, plus the painting source, ospreys brilliant 'Wellingtons Highlanders'.
Posted by Lee at 07:42 No comments:

Not much to report this week. Completed the 16 figures for british infantry unit number 2. Just needs varnishing and basing now. I'm undercoating the first 8 figures of the Scottish battalion up next.... probably the 42nd ' Black watch'. Decided to go with just one flag each for the British battalions and leave the regimental colour as I feel that 2 flags with a small 16 figure battalion looks too much.

One of my main sources of reference is a brilliant little book published in 1971 called 'Regiments at waterloo' by Rene North. I owned a copy in 1975 when I was just 17! I lost that copy but managed to find another copy on ebay some months ago, real nostalgia! 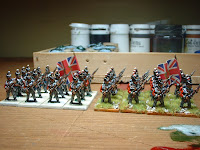 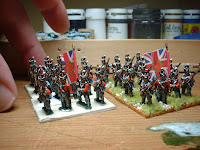 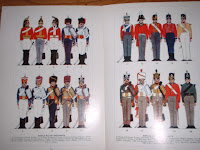 Spent the last couple of days finishing off the Scots Greys and varnishing/basing all figures painted so far. Have to say the grey horses of the 2nd Royal North British Dragoons (to give the Greys their full title!) were challenging. I used a dark grey over the black undercoat then drybrushed lighter grey/white over, I'm not 100% happy with the results but they look ok. Pictures below show the 'Greys' before finishing the horses and basing, and completed. My main aim is a paint job that looks ok and is fairly quick because I have hundreds of these figures to paint to finish this project over the months ahead.

Next up is more British line infantry then a Scottish battalion. After that I'll do more French line troops. I'm placing another order with Essex Miniatures today for the first artillery plus more line troops.

I hope someone reading this finds some inspiration to join this great hobby of ours. Enjoy the photos and if you have any comments or suggestions please email me at: Lgramson@aol.com I'm always happy to chat about wargaming and painting methods etc.

Photos below show the 'Scots Greys' during painting, still working on those grey horses! and when completed, plus some of the units complete now except for flags which I'm also ordering from Essex (Revo flagsheets, 15mm). Apologies for the poor quality of the latter photos.

PLease click on the images below to view full size. 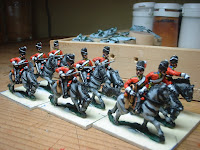 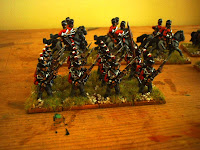 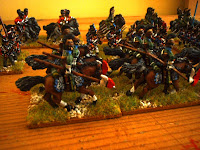 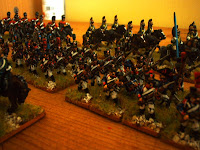 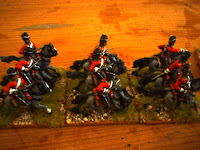 Not done much painting this week but the Scots Greys should be finished next week. Heres a couple of Napoleonic links you may like to browse.

The Napoleonic Association. - Superb Napoleonic re enactment society, if you get a chance to go see them its a great experience. Uniform detail is incredibly accurate.

Rafael Pardo's 20mm Napoleonics site - Excellent site packed with images of Napoleonic wargames and hundreds of painted 20mm plastic figures. Its well worth a visit and its regularly updated.

Front Rank Miniatures Napoleonic Archive - You are going to drool when you see these pictures! Amazing figures and amazing painting!
Posted by Lee at 01:38 No comments:

Just finished painting the first 16 British infantry. I should move on to another British line battalion next but I'm itching to get started on the Royal North British Dragoons (The Scots Greys). My cavalry units are all going to be 9 figures, although French cavalry should actually be 12 figures strong but I find this looks too big by comparison with my 16 infanrty units.I'm using WRG 'Napoleonic' rules, dated now but I still prefer them.


Todays pictures: British line battalion - awaiting base texturing etc and the unpainted 'Essex' Scots Greys awaiting a black undercoat - should be finished in a weeks time.


Going to update the blog with some more links etc next couple of days. 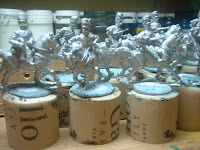 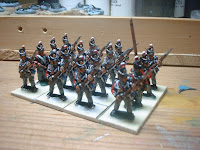 First 8 British line painted this week. YOu can see them below. I have worked out it takes approx 2 hours to paint 8 figures so I hope to complete 1 unit per week in future. Style has been kept fairly simple, using the black undercoat as shade where possible - the black gives depth to 15mm figures I find.
Also finished basing some of the French cavalry as you can see. Again its simply done with bird grit covered in synthetic grass. I want the bases to match the TSS terrain blocks I intend to use as the project develops.
More pics when the first british line battalion is finished next week! After that I'm moving onto the Scots Greys (9 figures) then another British line battalion.
Click on images to view full size.
20th Dragoons : Line Lancers : Britsh line first colours and completed. 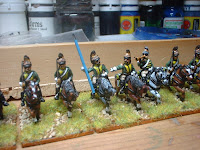 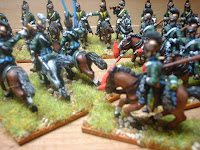 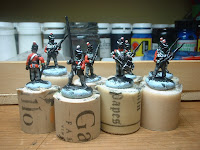 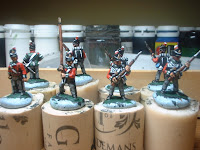 Unit number 4 completed - onto the British.

French Line battalion number 2, finishing stages. Coats are Midnight blue, highlighted with sky blue shade, slightly brighter than in reality but it works well for 15mm figures. The white is the most demanding colour on French line troops but you quickly get a feel for what to paint and what to leave as undercoat/shade. In general I use the Foundry 3 shade system of paints, for example the musket woodwork I use the dark 'spearshaft -shade' allowing some of the black to show through then highlight with 'spearshaft- light', no mixing and consistent colours. Just means you end up with LOADS of paints! I would recommend them to anyone though.

You can also see some of the unpainted Essex British, superb detail for such an old range. If you ever get a chance to visit the 'Essex' factory/shop you will love browsing through the cabinets of painted figures, 15mm & 25mm.

Soon as I get the first 4 units varnished and the bases finished I'll add some close ups here.

The British have arrived!

First batch of British arrived from Essex Miniatures today. Excellent figures as usual, I love the charging 'Scots Greys' ....I'll add a picture of a few unpainted figures later for comparison. The line infantry are solid and accurate with nicely detailed hands and faces.

Still finishing off the second French infantry unit. I hope to be starting on a British battalion by the weekend though.
Posted by Lee at 07:49 No comments: 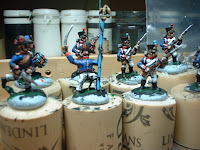 Ordered the first of the British troops yesterday so after this unit I will do the first British line battalion of 16 figures then I'm going to follow up with the Scots Greys....I'm 'itching' to get onto those!
Also realised how to upload thumbnail images to the posts today :-)
Posted by Lee at 01:35 No comments:

Today I have finished painting a unit of 9 lancers. Very enjoyable figures to paint and I'm happy with the results so far. The bases need finishing off in the pics. I have added a link to a web page where I can display larger images with more detail...hope you like them.

First 3 units now almost complete. Bases are covered but I need to add flags, varnish then finish the bases with synthetic grass.

The Waterloo campaign from scratch in 15mm!

Welcome to my blog. I started painting and collecting wargames figures way back in 1972 when I was still at school. I remember what started it all still! A couple of mates told me they had joined the school wargames club, I had no idea what that was but went along one night to have a look. What I saw there was a 4 x 6 table covered in Airfix Napoleonics that had been beautifully painted including many fine conversions. One little unit that I admired was the converted British 'Life Guards' , I just could not believe how wonderful they looked back in those days of gloss varnish!......... I was hooked.

So fast forward to February 2007. Over the years I have painted and sold thousands of figures in all scales from 6mm to 40 mm but mainly 15 & 25mm. For the last 5 years I have not painted a single figure but continued to peruse wargames magazines and web sites on a regular basis. So after much thought and planning I have decided to start again and collect and paint British /Allied & French armies. My painting skills have improved considerably over the years and I now consider myself to be a pretty good painter of miniature figures, hopefully as this project progresses I will build myself wargames armies of a high standard.....at least thats the plan!

OK so now the plans for this project in brief. After looking through all of the manufacturers of 15mm figures I have decided to go with Essex Miniatures. Why? well because I like that chunky style, and they paint up well en mass. They are also very accurate Napoleonic figures which I like. I have also spent many happy hours over the years in the Essex showroom if you can call it that! I just love browsing through the display cabinets....very inspiring.

So I have set myself some guidelines for the armies I plan to produce, together with some modest tagets:

* Units organised to WRG rules, so decided to standardise my unit size at 9 figures for cavalry units and 16 figures for infanrty battalions. Artillery batteries will be of 3 guns for British and 4 guns for French. Smaller units like the British 95th Rifles etc will be in uits of 8 figures.

* Plan is to paint 1 unit per fortnight minimum, so 24 regts/battalions in the first year is my target. I hope to produce rather more than that though!

*Painting standard will be good to v good I hope! I enjoy painting and find it very relaxing. Over the years I have developed my style and I'm happy with it. I use the Foundry 3 shade paint system - base colour/shade/highlight. They are good quality acrylic paints that cover pretty well over my chosen black undercoat. For basing I use fine 'birdgrit', highlighted brown/white then I add synthetic grass in patches.

So the first battalion will be a French infantry unit of 16 figures, made up of 2 voltiguers, 2 grenadiers, 1 officer, 1 standard bearer and a drummer plus 9 other ranks. They will be based in 4's to WRG napooleonic rules but on slightly bigger bases: 40mm wide elements x 10mm deep.