I like to keep the posts regular here, even if it means posting pics of semi completed units. This week I'm working on some British Heavy Dragoons. I have switched back to a black undercoat on the horses as I was not totally happy working over white for some reason. I find it easier blending colours over the black and it speeds things up. The 8 Dragoons are painted and just waiting for their mounts. All figures are by Front Rank and as soon as I saw them I decided that FR is the way to go for all future figures. They match the Perrys very well overall for scale. I made a mistake in ordering the wrong horse for Picton, so he will have to wait until next week when I re order before I can finish him. The figures were undercoated black, but then lightly dry brushed white to pick up the highlights and I'm very comfortable now doing this and will stick to it.
I recall being quite moved as a teenager at the sight of Pictons top hat, torn open by a musket ball, in the National Army Museum in London, among many other Waterloo relics. Wellington of course discouraged the use of umbrellas by his staff but Picton, being the character that he was, continued to carry his! This little figure was a joy to paint.
Dragoons should be finished and based by Friday so I'll post a pic then. Next is another British cavalry unit, Light Dragoons. 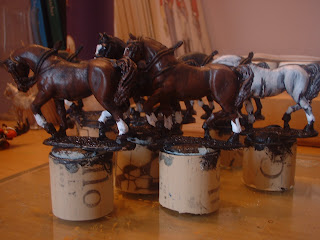 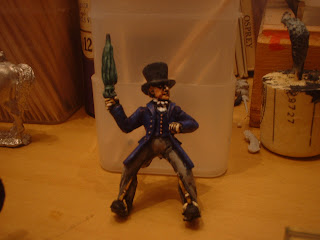 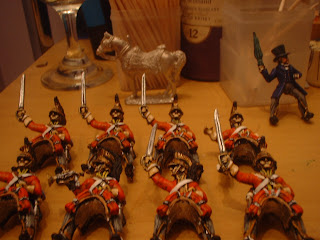 Like many wargamers of a certain age I remember when the monthly publication of a glossy magazine was eagerly awaited as this was the only way to keep up to date with what was happening on the wargaming 'scene', and the figure manufacturers would advertise latest releases etc. If you wanted to sell some figures you placed a small advertisement and waited about 6 weeks for it to appear! How things have changed. Digital photography and the internet now enables us to spend hours perusing other peoples collections and one thing that I still enjoy as much as I did in the magazine days is reading battle reports with stage by stage pictures. I often read blogs etc on my IPod, sometimes as bed time reading, the device being light and small yet having the ability to display text and images at full screen size which I find quite easy on the eyes. However, at the other extreme I also like to hook the laptop up to our large screen TV and look at battle reports etc on that. Its great seeing those images blown up like that, and just as in the old 'magazine days' I can drool over the lovely figures and terrain etc! Last up was John's latest offering from his excellent 'Wargaming in 28mm' blog, I sat and read the write up on the TV and the images were just stunning. Might all seem a bit 'geeky' I know but I see it as simply using the available technology to its full. Rafa's battles (Project Leipzig) also look great on the big screen.
On the painting front nothing to report so far this week but I hope to be starting some Front Rank Dragoon Guards today. Excellent service, so fast. Been looking through the FR site and planning future orders. More cavalry and more French artillery, then some British Light infantry. 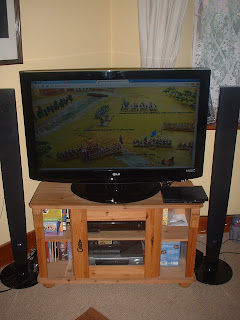 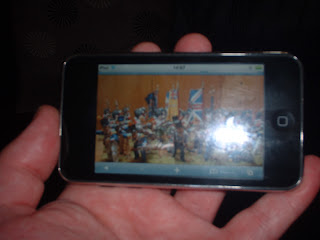 Well, I have been waiting for over a week now for my latest Perry metal order to arrive and not a word! Last order I waited 2 weeks before contacting them to be told they were waiting on stock. I really feel that these days customer service is important and of course its such an easy thing to run shopping cart software that tells you when an item is out of stock so that you can maybe order an alternative. This has made up my mind to place all future orders with Front Rank. All future figures will be metal as I had planned to do anyway. Hopefully the British cavalry will show up shortly as I'm now out of figures to paint.
Have managed to finish 2 more units this week, the 92nd Highlanders and a unit of Legere. The latter was made up from the 12 skirmishers I mentioned below plus 4 new figures. As I said I was one figure short so decided to use one of the Perry plastic casualty figures to make the number up and I'm pleased with how it looks on the base. Thank you to Tod for offering that odd skirmisher but I had already painted up the casualty. The legere unit are in mixed campaign dress, I re painted some of the trousers but wanted to leave some white with patches etc, overall this unit has a good feeling of movement. I spent a long time fiddling around with the placement of these figures, and finally decided to place the firing figures at the rear, firing through and over the front rank. I'm happy with the composition.
Total figures painted now = 292.
I need to work on my photography next! I built a couple of 6500k 'daylight' bulbs into my little cupboard for taking pics but I think I need more light in there.
What's next?
Well that depends on what arrives first, I'm going to order some FR figures today but I also plan to start working on terrain. I'm going to make up some road and river sections and see how they look. Over the next couple of weeks I have the following to do:-
This should keep me busy. Any comments/suggestion on terrain etc or anything else always welcome. 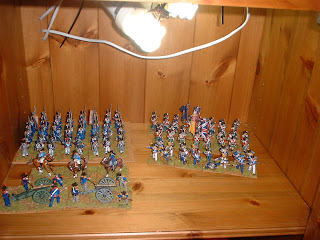 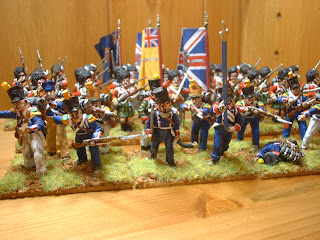 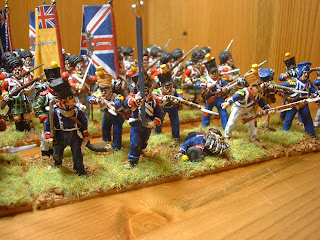 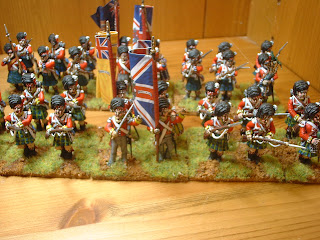 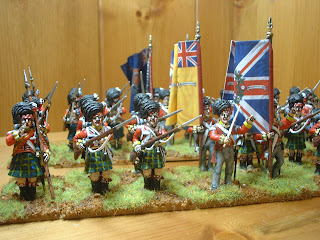 More Scots and a request.

I seem to be settling into a comfortable 8 figures painted per week now and here's the last 8 painted. I have some British heavy cavalry due any day now so decided to get the 2nd Scots unit completed before I start the cavalry. These are the 92nd with lovely yellow facings and a bold yellow 'overstripe' to the tartan. Kilts were painted just as for the 42nd but with the yellow then added. Again, I'll add the final image of the unit once completed and based in a few days time.
I've been looking at the collection so far and thinking about organisation for the rules I will be using. As the rules don't actually use skirmishers as such (units are assigned a SK or skirmish value dependent upon type), I have now decided to rebase the 2 units I have currently on skirmish bases and make them up to 16 figure standard units. I have 8 of the Perry plastic 95th Rifles painted and will add to them a pack of Perry metal 95th plus a metal command pack. But I also have 12 Perry plastic French light infantry (see pic below) that I now plan to make into a 16 figure Legere unit with a bit of subtle repainting. I have a suitable perry metal command set for them but that will still leave me just 1 figure short of the 16 I need! So my request is.... does anybody happen to have a spare Perry plastic voltiguer skirmishing figure they cant use? Otherwise I'll buy a pack of metals to make them up but I only really need the 1 figure! On the subject, I have a few spare perry Brits, plus 28 figures left from a Victrix Highlander box if anybody needs spares to make up units etc.
Rules.
Once the 2 units are made up and re based this will give me 16 infantry units of 16 figures, 8 per side so enough for a first game. I have included a link to the rules I will be using before but I just thought I'd explain why I chose them finally. The rules were written by Paul Leniston who I first encountered in the old 'Battle' magazine in the Eighties when a series of articles appeared concerning his house move and the setting up of a new wargames room in his double garage. I remember drooling over the photos at that time of his huge collection of French and Austrian units. I believe the series was called 'I did it my way'! Anyway, fast forward to 2010 and we find Paul and his wife Jan living in Spain having retired there in 2005, still as enthusiastic as ever about wargaming. I've been 'chatting' to Paul via his blogs for a good while now and followed many of campaigns and battles. I came to enjoy the style of game his own rules produced and thought they would suit me. I'm not a purist, I just enjoy painting units and want a game that allows me push them round the table top and is above all else fun to play and plays fast. Paul has said that he was inspired by the Two Fat Lardies rules and this is reflected in the mechanisms. While Paul uses units of just 8 infantry or 4 cavalry I decided to double the basic unit size, this makes no difference to the way the rules play. The basic unit is a brigade. I have no problem with small units representing large formations as I tend to regard the figures as playing pieces and try to think in terms of ground scale/base size. For me the advantage is that I can build up armies fast and include all of the types I want to paint, Brunswickers, Dutch Belgians, Nassua etc as I intend to. Thus, when I deploy my Scots units they simply represent a brigade of infantry containing a couple of Highlander battalions for the purposes of the game.
If anyone wants to read through a move by move account of one of Paul's battles then here is the battle of Busaco, with some lovely photos of the game.
Cheers all, and I'll be back soon with the completed 92nd. 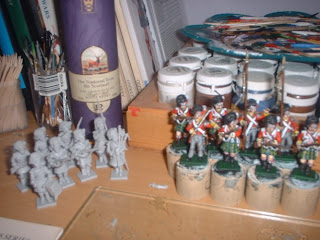 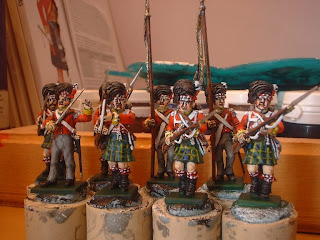 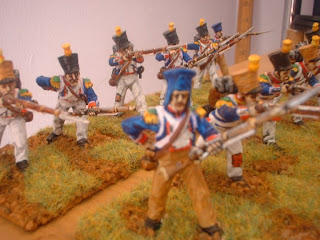 Painted the last 4 figures to complete French infantry unit number 8. All based and just awaiting colours. Got a clear desk now so I have the choice of the other Highland unit next or some british cavalry (finally!).

Wont be too much longer before I'm ready for my first game. 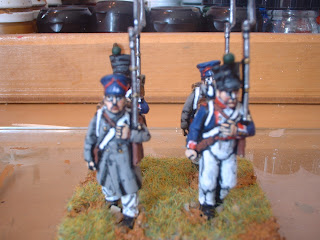 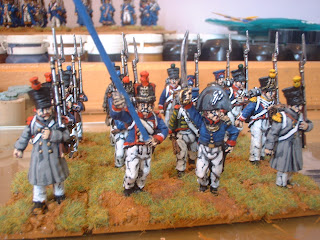